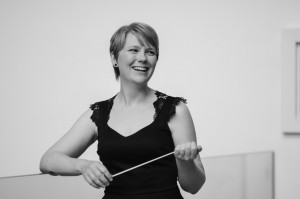 Clare was appointed as Conductor of the North Cheshire Wind Ensemble in 2013.

After graduating in 2001 with a Bachelor of Music (Education) (Hons) from the University of Queensland in Australia, Clare worked as an Instrumental Music Teacher with Education Queensland for ten years. During this time she taught brass, woodwind and percussion to students aged 9-18 and conducted school ensembles at all levels, from beginner band classes to advancing high school Wind Bands and Jazz Bands. She also enjoyed a long association with the Sunshine Coast Youth Orchestra, conducting the Wind Ensemble and later the Concert Orchestra. A french horn player, Clare was a member of the Queensland Youth Orchestra (1996-2002) and a foundation member of the Queensland Wind Orchestra (2004-2011). She has also performed with the Queensland Pops Orchestra, Suncoast Sinfonia, Pacific Chamber Orchestra and Noosa Sinfonia.

Clare was mentored in conducting in Australia by former Director of Music with the Welsh Guards, Major Derek Taylor and completed a summer course in Instrumental Pedagogy at the University of Queensland, during which she participated in conducting classes with Patrick Pickett CSM. Clare has worked as a guest conductor and tutor with the Queensland Youth Orchestra Wind Ensemble and the Queensland Wind Orchestra.

As an ensemble member she has played in conducting classes and concerts with Tim Reynish, Tim Lautzenheiser, Peter Boonshaft, Robert Sheldon, Bruce Pearson and Ralph Hultgren. For the past two years she has attended the Wind Band Conducting Course at the Sherborne Summer School of Music, studying with Mark Heron, Russell Cowieson, Tim Reynish and Bjørn Sagstad.

Since having moved to the United Kingdom in December 2011, Clare has been based in Manchester. She is currently part of the Pastoral Care team at Chetham’s School of Music, Chamber Orchestra Conductor at Warrington Youth Orchestra and Head of Individual and Instrumental Music at Bolton School Girls’ Division.