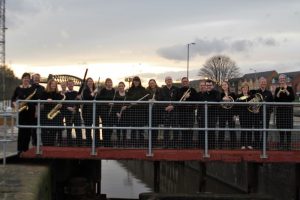 Latchford Locks has been composed by the renowned British composer, Gary Carpenter, who is currently living on the Wirral. Gary Carpenter is Professor of Composition at the Royal Northern College of Music (RNCM), a composition professor at the Royal Academy of Music, and was invited by the BBC to compose a new work for the opening night of the BBC Proms in 2015. Gary has
also provided music for many films including The Wicker Man and

The Hitchhiker’s Guide To The Galaxy.

Latchford Locks is the 2nd in a series of works inspired by the Manchester Ship Canal and commissioned by the NCWO. The work starts with a simple theme for the People’s Canal, as it was originally known, which evokes the misty and murky waters of the canal. Through a series of variations Gary brings to life different aspects of the canal from the Boggy Stream and the Stoney Sluices to the Goddess of Fruitfulness (the now derelict Pomona Lock) and the historic Black Bear Canal.

The piece has been commissioned by the NCWO and Tracy Woods and is dedicated to Bridget Smith. Bridget was a great lover of the clarinet and had performed with the orchestra for over 30 years until she recently lost her battle with cancer. Bridget had a wonderful life and brought joy to children and adults around the world through her work in the animation industry. Bridget worked for Makinnon and Saunders for over 30 years and worked on programmes such as Bob the Builder, Postman Pat and films including Mars Attacks and The Corpse Bride as well as a number of TV commercials over the years.