Trawling through the archive to try to find something Scottish-related to post for Burns Night we came across this recording of our performance of the Fanfare and Scotch Rhapsody from Walton’s Second Facade Suite. This is taken from a concert we gave on 31st March 2007 at the Pyramid Arts Centre in Warrington. 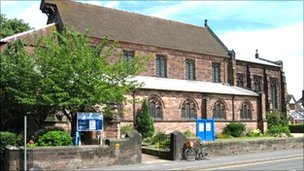 The NCWO have been invited to perform by Alsager Music and Arts at St Mary’s Church, Alsager on the Saturday 21st March at 7:30pm.

Alsager Music and Arts (AMA) are a small group who organise arts events of all types in Alsager. Rachel White is a member of AMA and has played the clarinet with the NCWO for almost 10 years, and it is due to Rachel’s ongoing commitment to community music that this event has been arranged. The NCWO would therefore like to thank Rachel and the AMA for all their help in planning this concert.

To find out more about the AMA, please visit their website.

For details of the concert venue and programme, please click here.

The NCWO is pleased to announce the appointment of Clare Deady as the new Musical Director of the orchestra. We would like to thank everyone who applied for the post and wish you all the best in your musical work.

Clare has been conducting the orchestra since the start of 2014, and her appointment as Musical Director will allow the orchestra to plan for the future, work on new repertoire, and continue to improve the sound quality.

Clare graduated in 2001 with a Bachelor of Music (Education) (Hons) from the University of Queensland in Australia, and worked as an Instrumental Music Teacher with Education Queensland for ten years. Clare moved to Manchester in 2011 and also conducts the Warrington Youth Orchestra, and is Head of Individual and Instrumental Music at Bolton School Girls’ Division.

Clare is thrilled to have been appointed as Musical Director of the North Cheshire Wind Orchestra and said ‘The North Cheshire Wind Orchestra are a fantastic community ensemble; they are well known for their commitment to high performance standards and a diverse repertoire. I look forward to continuing to work with the members of the ensemble and am excited to now be programming for the 2014-2015 season.’

The “Theatrical Composers” concert on 12 April 2014 was the first of two concerts to be conducted by our Guest Conductor Clare Deady. Clare moved to the UK from Australia in 2011, and has been working with the band over the last 4 months to  develop the band’s skills and ensemble playing, which she has done with great success.

The concert included a new Concerto for Flute and Wind Orchestra by Stephen McNeff, which was commissioned by the NCWO, Lambeth Wind Orchestra, and the Dublin Concert Band.

The solo flute part was beautifully performed by Kristine Healy, who performs and mentors regularly with Leeds Youth Opera and has performed throughout the UK and continental Europe.

Stephen McNeff attended the concert and described the piece as a conversation between flute and orchestra, with the soloist and orchestra sharing and developing ideas. In the first movement the flute spins a long tune over the ensemble, which was emotional and expressive. The orchestra allowed the lyrical flute playing to sing through whilst maintaining a rich and gentle tone.

Members of the audience commented on how much they had enjoyed the programme of music which was “well balanced, expertly delivered, and one of the best recent performances by the NCWO”.

The next concert will be on Saturday 28th June 2014 at the Waterside Arts Centre, Sale, and includes music from Star Wars, and Mars from the The Planets.